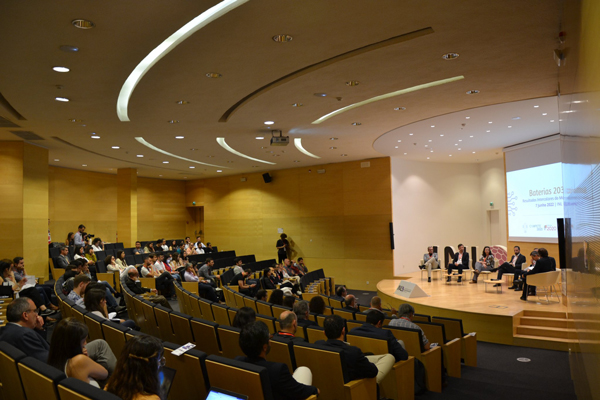 It is another step forward towards urban sustainability. Braga will have, in 2023, a 'Living Laboratory' that, based on a new generation of batteries, aims to promote decarbonisation, one of the greatest and current challenges for communities. The new space was announced on June 7 at an interim session to present the results of the Batteries 2030 Project.

The initiative, which took place at the International Iberian Nanotechnology Laboratory (INL) in Braga (Portugal), was attended by the Portuguese Assistant Secretary of State and Economy, João Neves. The objective was to publicise the scientific and technological progress achieved in the two years of Batteries 2030 activity related to new energy storage, management and distribution technologies.

At the session, the consortium, of which CeNTI is one of the partner entities, and the various solutions of the Project, namely 5 of 6 PPS (Product, Process and Services) that compose it, were presented: "New generation batteries", "Batteries life-cycle valorisation", " Technologies for decentralized production", " Platforms of energy management" and "Living Lab for the decarbonisation".

In addition, the demonstrators to be installed in the 'Living Laboratory' were also presented, which will be located in the Gnration building and adjacent areas in the centre of the city (Braga – Portugal) and will combine close to 20 new disruptive technologies, which aim the creation of a new model of energy production, storage and management in an urban environment and are being developed within the scope of the Batteries 2030.

The Laboratory will thus have, among other elements, 2nd life batteries for valuing the life cycle of current lithium batteries, flow-through batteries, hydrogen electrolyser with fuel cell, perovskite solar cells, photovoltaic plant, concrete modules able to generate energy, several sensors based in printed electronics, intelligent luminaires with wind, solar and electric production, and a charger for electric mobility. All these resources will be managed through an energy management platform, the main goal is to maximise the use of renewable production, thus decreasing the energy and environmental invoice of consumers.

The consortium intends to make this an "example for the future", demonstrating the necessary transition from a model of decentralised production, transport and distribution to a model of production close to the places of consumption.

The 'Living Laboratory' will be the culmination of the mobilising Project Batteries 2030, which integrates 23 partners – 14 businesses and 9 entities from the scientific and technological system. Led by the Portuguese company dstsolar, the Project seeks to respond to the challenges related to decarbonisation and the dissemination of sustainable energy communities, in line with the initiatives of the Portuguese Government for carbon neutrality 2050 as well as the European Green Deal.

CeNTI was present, in the last quarter, at the leading international technological fairs. In 2022, the events returned in force and the Nanotechnology Centre's differentiating solutions were highlighted throughout Eu...
more

Green4Industry, a SIAC Project, is based on the European Green Deal, a sustainable growth strategy that aims to achieve carbon ne...
more
To use our services you must accept our Privacy note.
Privacy Note |