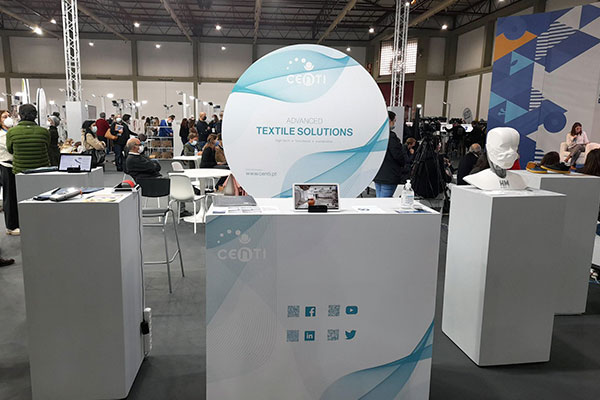 CeNTI was once again present at Modtissimo Portugal, one of the most important international events in the Textile and Clothing Industry. In the initiative, which took place on 16th and 17th of February, at Exponor, in Porto, the Centre presented some of the most recent technological innovations. Thus, Projects such as HydroMask, Wear2Heal, SmartHealth4All, HelpInTex, Biotrace4Leather and 2Flight were highlighted.

In addition to sharing the latest trends and news in the sector, 14 talks were also held at the event, divided between the Modtissimo and CITEVE spaces, with various topics such as sustainability, innovation and research in the Portuguese textile industry. The magazine "The Green Wave" and the "Showcase" of sustainable products from national companies, a result of the "Sustainable Fashion From Portugal", were also launched.

Modtissimo, whose 2022 edition had nearly 5,000 visitors and 300 exhibiting brands, is a privileged space for new business and networking among professionals in the area, from customers to designers, stakeholders and manufacturers.

According to the organisation, with the return to Exponor, there was a 15% increase in attendance compared to the last edition. There were 475 foreign buyers among the visitors, from countries such as Austria, the United States of America, Germany, Spain, and the Netherlands.

Know more about CeNTI's differentiating Projects in this area HERE.

Be@t: the Project that wants to reconvert the textile and clothing industry

From nature, in a circular and sustainable way, to people. With the bioeconomy motto, Be@t aims to develop solutions to empower and catapult the textile and clothing industry to the forefront in topics such as traceabili...
more

CeNTI was present, in the last quarter, at the leading international technological fairs. In 2022, the events returned in force and the Nanotechnology Centre's differentiating solutions were highlighted throughout Eu...
more
To use our services you must accept our Privacy note.
Privacy Note |