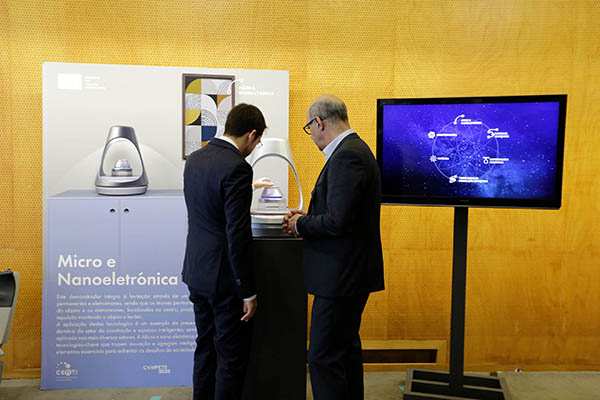 Experts analyse the impact of KETs on the transformation of Industry

Several European and Portuguese researchers, experts, businessmen and entrepreneurs gathered at the Almeida Garrett Municipal Library in Porto, in a meeting that aimed to analyse, debate and affirm the importance of Key Enabling Technologies (KETs) in the transformation and modernization of the Portuguese Industry. The initiative, organized by CeNTI and the Portuguese Textile Cluster, was attended by João Torres, Secretary of State for Commerce, Services and Consumer Protection, at the opening session.

In addition to the importance and implementation of KETs in the several industrial sectors, many topics related to these technologies were also addressed throughout the day, such as innovation and creativity in companies, sustainability, efficiency, research and the development of new products, solutions and services based on high technology.

Several projects were also presented in the initiative, including a showcase of several demonstrators and videos. Two national projects: the bKET, promoted by CeNTI and related to the transfer of scientific and technological knowledge on the KETs, and FuEL, an entrepreneurship program, developed by CeNTI, INL and Pedro Nunes Institute, which supported the creation of six start-ups, projects based on the creativity, innovation and application of these Key Enabling Technologies.

Two European projects, in which Portuguese Textile Clusters participates, were also presented, focused on supporting SME’s in the textile and clothing sector. The SmartX (European Smart Textiles Accelerator) aims to fill the current gap between the development of smart and wearable textiles and their industrialization and absence in the market. Tex4IM, composed by several European textile clusters, aims to improve the innovation capabilities, business models, knowledge levels and other competitive factors of countries where the textile and clothing industry represents a significant part of their economy.

In addition to the presence of António Braz Costa, CEO of CeNTI and General Director of CITEVE, the event was attended by Heads for European and national entities, such as Marco Manfroni, from the European Commission, António Bob Santos, from ANI, Lutz Walter, from Textile European Technology Platform, companies from different fields, technology start-ups, among others.

A day noticeable by the sharing of knowledge, ideas, opinions and experiences focused on the promotion of KETs and their applicability in Portuguese Industry.

CeNTI and CEB - Centre of Biological Engineering of the University of Minho have jointly...
more

The program "Isto faz-se por cá" ("This is done around here", in English) made known the main goals and results of...
more

CeNTI was present at MEDICA and Productronica 2021

In total, 12 Projects were disclosed at Automotive Interiors Expo Europe 2021, one of the largest fairs focused on the automotive interior, whic...
more

PAC - Portugal AutoCluster for the Future is a Mobilizing Project led by the company
more
To use our services you must accept our Privacy note.
Privacy Note |